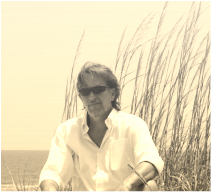 Lawrence Thackston, a writer of Southern mysteries and thrillers, has taught in the public school system for nearly twenty-five years. He is a lifelong native of South Carolina, where he lives with his wife and three children.
An Interview with Lawrence Thackston
Author of Tidal Pools

What is Tidal  Pools?

Tidal Pools is a Southern mystery-thriller set along the coast of South Carolina in the fictional Galeegi Islands. It is a story of intrigue and suspense involving police procedurals, the Gullah culture, race relations, African mythology, environmental concerns, and a  seemingly unstoppable serial killer. It delves into the themes of misguided  justice and unforgivable sin.

Why use fictional islands for the setting?

The choice to use a fictional setting was two-fold. First, for the novel to seem real and organic and still tell the story I wanted  to tell with the elements of proximity and character engagement intact, I had to create Galeegi and its associated islands. It was the only way certain plot points would work. Secondly, I wanted an air of generality associated with the islands so that one could read the novel anywhere along the South Carolina  coast—from Hilton Head to Myrtle Beach—and feel it was a part of that area or at  least close to it. Real locations such as Charleston, Columbia and Beaufort are mentioned throughout the novel to make Galeegi seem a more plausible locale.

What distinguishes a Southern mystery-thriller from other regional forms of the same genre?

Southern writers have long known that certain stories can only happen here. It’s about the location certainly—our beaches, our mountains, our rivers. There is an aura, a sense of mystery about us geographically. But it’s also about the people—our way of life, our way of thinking. But like any thriller, it should still have those page-turning elements. And just because the time moves slower down South doesn’t mean the thrills have to be any  less.

What is the premise of the novel?

The former prime suspect in a forty year old, murder case is found dead of a questionable suicide in a lighthouse on nearby Amoyeli Island. Tyler Miles, a newly recruited patrolman with the Galeegi Police Department, becomes an unlikely member of the investigation team and is immediately swept up in a spawned tidal wave of violence and deceit that threatens to impact the entire Lowcountry.

This is your second mystery-thriller. What are the origins of your stories?

Imagine boating down the twisty turns of a dark river, or playing hide and seek in the jungle brush of a barrier island, or repelling
down a slippery rock face—that’s how I was introduced to the settings of these stories. And it’s hard not to be alone in these environments without picking up on the sense of wonder and mystery of it all. Couple that with a deep interest in the history of the land and its people and you have the genesis of a good story. Plot and character follow soon after.

Can you further explain the writing process? How does it work for you?

I think the writing when’s and where’s are different for everyone. As stated before, my stories are generated through landscape and then I go from there. Usually, I have a main character in mind—for whom the eyes of the story belong. And as a mystery thriller, I generally know how it’s going to end before I begin to write. From there, I begin to outline the whole story and write out vignettes of action or dialogue. Research is essential, with the primary research done before any main writing is done. Research generally helps to shape the story and may even create a new character that needs to pop up along the way. For these mystery-thrillers, which I like to think of as long weekend reads, I try to target enough story for between 85 and 90 thousand words.I have no set writing time and I’m not disciplined enough to write everyday—only when life allows it. I have no set number of words that I must write each day, and I’ve never experienced writer’s block. Some days the story takes over the writing and I just go with it;
other days, it may take four or five hours to wrap my head around one paragraph--that’s not being blocked, it’s just a part of the writing process—albeit a slow and sometimes difficult part of it.

What other writers have inspired you?

As an English teacher for the past twenty-five years, I’ve had the privilege of teaching the works of many gifted and wonderful
writers, from William Shakespeare and Geoffrey Chaucer to JD Salinger and Alice Walker. I don’t have a favorite in classical literature, but I like to emphasize  the works of Ernest Hemmingway for the brevity and strength of his descriptions and straightforwardness of his tone and diction. As for the modern writers, again there are too many to name, but it is a goal of mine to be identified with the Southern landscape as much as Pat Conroy is of the South Carolina coast and Charles Frazier is of the North Carolina mountains—two areas for which I also  have a great affinity.

Your stories often have other-worldly factors, perhaps  even pertaining to the occult.
To what do you attribute those elements?

It only seems that way upon first glance, but the beliefs of certain Native American tribes and the religions of many African descendants are in fact a part of our Southern culture and have been for some time. The stories sometimes show the difference between these views and traditional, conservative ways of thinking, but never in a mocking or disparaging way. And really, when I infer there may be more to life than what one religion or what  one value can denote, I’m just echoing that great Shakespearean quote from  Hamlet when he states: “There are  more things in Heaven and on Earth than are dreamed of in your philosophies.”


As a school teacher, one of the criticisms you have had about your novels is the use of profanity and violence.
Do you not have an obligation to keep your work clean?

I’m not callous to those concerns; I still greatly believe there should be parental and educational guidance in the selection of novels for schools on all levels. But The Devil’s Courthouse and Tidal Pools are adult fiction, and their story lines lend to a harsher tone, a harsher reality. In writing for a particular character or situation, sometimes these words and actions are necessary. In fact, I feel I would be more disingenuous by not using them. Like most writers, I’m not the characters I create—I’m not the
downtrodden cop, or the addicted hooker or the vengeful serial killer. But I do write about them, and I try to make the characters as real as possible.


How do you create characters for your stories? Are they people you know or are they created out of thin  air?

Both. I like to infuse people I know into certain  characters whether it is in name only, part of their personality, a physical
description, et cetera. Sometimes I picture a character based on an actor or politician or a person I’ve seen in the news. But it’s all mish-mashed—all characters are fictional and ultimately they all have a life of their own.

Let’s get back to Tidal Pools. Why that title specifically?

Physically, it takes place on the beach so there is that obvious aspect. But the title is actually much more suggestive than that. After the crashing of the waves, after the energy of the tide is gone, after the storm, it’s what’s left behind. Tidal Pools is a mystery, and it’s what’s left behind that will eventually help the protagonist find the answers to the climatic questions that the novel asks.

Ultimately, what do you hope people come away with after reading Tidal Pools?

I hope people are entertained primarily, but I also hope that parts of the novel resonate with them for a long while. Reading a good
book is like taking a well-planned vacation. At the end you feel refreshed and rewarded, and a little bit of that place stays with you, forming who you are and what you believe. And after returning to the grind of day to day living, you can’t wait to return there again.

What’s next for you in your writing? Do you plan on  continuing these mystery-thrillers
or branch out to other forms?

I would love to continue writing in the mystery-thriller genre and more. I have several stories etched out that would make for fun, exciting thrillers, but I also have many others that I’d like to write that are much more weighty and serious in nature. Of course, I will take whatever the market allows. I am happy to be associated with Holladay House Publishing for now. I would love to continue to work with them as they continue to expand as a company. Hopefully, when I retire from teaching in a few years, I will be able to throw myself that much more into my work and maybe tackle some of those longer, in-depth pieces.